Can You Run It?

The link on the right will take you to the download page on payloadz. The Specialty Orb, is a modest $5.99. This is a one-time fee. There are no in-game fees or charges. 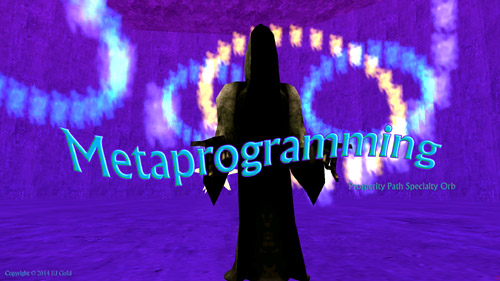 A little something about the Orb...

What is Metaprogramming? This highly unique Orb brings the Runner into a Gamespace reminiscent of the labyrinthine corridors of a futuristic spacecraft.

Moving down and up through fluid filled passageways, one's Avatar is led to a series of chambers wherein the Programming occurs.

What is the nature of this Programming? That is for the Runner to determine. The soundscape is evocative of previous Prosperity Runs and creates an atmosphere wherein the determination to work for the Benefit of All Beings Everywhere is immediately set into place. The details of the Programming will be relevant to the specific needs of the Operator.

This is very much a "Shift" Orb and superb for use in Inter-Dimensional Travel.

The main corridor may be regarded as one's Prime Dimensional Reality. By moving down and through the underwater halls, a passage is made between the Programming Chamber (or "Module") and one's PDR. Once the Program is set and "turned on," it is brought back through the liquid (which may be regarded as a form of the "Astral Light") and downloaded into this aspect of Reality. It is not unlike planting a seed and bringing it up through the soil where it may blossom as intended.

Oftentimes we have a vision of what could be. We have a desire to see this manifest. Yet some blockage remains, some difficulty of translation. Programming is not enough. We require a Metaprogramming whereby the design envisioned may be constructed on a plane beyond the lock-down mechanisms of the Beta Brain. From this Causal Realm, it may dive down and flow beneath Beta Activity, rising up unencumbered and ready to be realized.

Make a Run and have Fun. Manifesting your Vision has only BEGUN.